Staff delegates: representatives of all the Organization's members of personnel 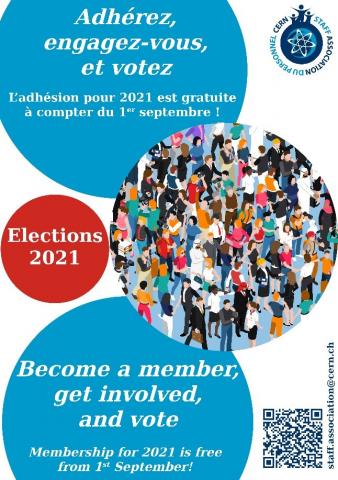 As already announced in the previous ECHO, in October of this year, elections will be held for your staff delegates for the 2022-2023 term.

To take part in the vote and choose your representatives, you must, if you are not yet a member, join the Staff Association.

Become a member, it is still time to join, especially since membership for the 2021 calendar year is free as of 1st September.

How is the election of staff representatives of CERN conducted?

Any member of the personnel, whether staff, fellow or associate, who is also a member of the Staff Association and wishes to become involved in the Staff Council, is invited to submit an application until 15 October at 5 p.m.

You will then have three weeks, from 25 October to 15 November, to vote in order to elect your representatives.

The voting procedure will be monitored by the Election Committee, which is also in charge of announcing the results in ECHO on 23 November and 7 December.

Join and vote, it is the least you can do for your Organization, for your colleagues’ members of the personnel.

Get involved for your Organization, for your colleagues in your Electoral College, for CERN members of the personnel and, more generally, for the CERN community!